APEC 2017 Vietnam and opportunities for tourism

APEC 2017 Vietnam and opportunities for tourism 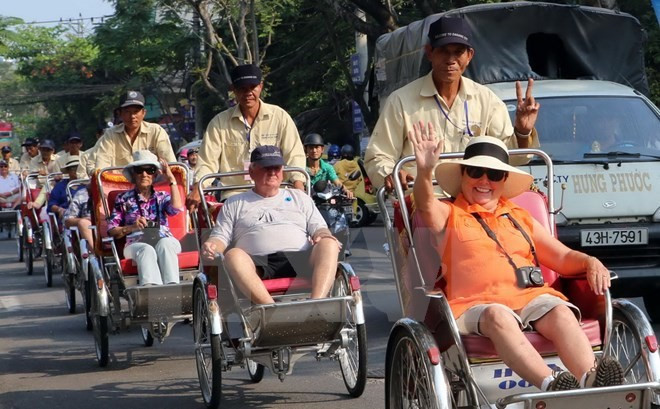 With APEC’s overarching goals of expanding and liberalizing the trade and investment sectors and cooperation priorities of the APEC 2017 Vietnam, APEC’s tourism in general and Vietnam’s tourism in getting opportunities for development.

The Asia-Pacific Economic Cooperation (APEC) Forum was established in November 1989 in Australia with the aim of promoting economic, trade and investment liberalization in the region. From 12 founding economies, APEC has gathered 21 member economies, accounting for 39% of the world population, 57% of global GDP, affirming its position as a forum for top economic cooperation in the Asia-Pacific region.

In a world of turbulent globalization, Asia-Pacific continues to be a dynamic, geographically growing region of economic and political globalization. Vietnam officially joined APEC in 1998 and has become an active participant with many practical contributions to APEC 2017 Vietnam, including the successful hosting of APEC in 2006.

In recent years, APEC has become an attractive and friendly destination for visitors inside and outside the region. By 2015, the APEC region receives over 396 million tourists, representing 33% of the world’s total tourist arrivals. generated revenue of $ 598 billion, accounting for 44.5% of global tourism income, generating 47.9 million direct jobs. According to the World Tourism Organization’s (UNWTO) forecast, by 2020, the Asia-Pacific region will attract 27% of global tourists instead of 19% in 1995, while the number of visitors to the region Europe will fall from about 60% to 46% by 2020. This trend will continue in the coming years.

However, in the development process, the APEC tourism industry also encountered many challenges, especially the challenge for sustainable tourism development. Although APEC tourism development has made a positive contribution to the region’s overall prosperity, UNWTO says tourism has had a negative impact on the environment by contributing up to 5% of emissions. From the operation of the means of transportation and tourism. Solid and liquid wastes from tourism and residential businesses cause environmental pollution of soil and water, and the depletion of natural resources.

On the other hand, tourism is also a vulnerable sector, sensitive to the changes of nature. Climate change, landslide, sea level rise are the factors that affect the destination attractions, tourist season and operating costs. Therefore, “Sustainable Tourism Development” is defined as an important objective of the global and APEC member economies. This is also the focus and theme of APEC 2017 Vietnam tourism held in Vietnam.

With APEC’s overarching goals of expanding and liberalizing the trade and investment sectors and cooperation priorities of the APEC 2017 Vietnam, APEC tourism in general and Vietnam’s tourism in particular are at the forefront. development opportunities:

Firstly, in the fast-growing area of tourism and second only to the European region in terms of attracting tourists, Vietnam has a great opportunity to exploit its rich tourism potential. This is to meet the diverse needs of tourists and become an attractive destination with the high growth of international tourists. This opportunity will be higher as Vietnam is seen as a new and friendly destination, safe on the regional and world tourism maps on the basis of expanding and liberalizing trade and investment fields, The tourism and service sector is seen as a priority in 2017.

Second, the support of APEC economies in 2017 to Vietnam’s initiative to promote regional development in the Asia-Pacific region, both economically and socially, will link It also provides opportunities for Vietnamese tourism to gain access to investment resources and international experience in sustainable tourism development associated with green growth, with the enhancement of capacity. Responding to climate change and linking it with hunger eradication and poverty alleviation to help all citizens enjoy the fruits of globalization and trade liberalization through tourism.

Third: The implementation of one of the four APEC Forum’s four priorities for cooperation is to deepen economic cooperation among member countries, as an economic service sector, and tourism in Vietnam. to attract investment in infrastructure that connects Vietnam as a destination with other destinations in the Asia-Pacific region; Access to high-level tourism technology of developed countries and expansion of tourism market, especially in member countries. This is an important factor for Vietnam’s tourism to create breakthrough development aimed at attracting 17-20 million international visitors and basically become a spearhead economic sector with a contribution rate of over 10% GDP of the whole country in 2020.

Fourth: With the initiative of APEC 2017 Vietnam on “Raising Competitiveness and Innovation of Micro, Small and Medium Enterprises in the Digital Age”, Vietnam tourism in general and Vietnam tourism enterprises In particular, over 90% of small and medium enterprises and tourism businesses will have the opportunity to access international support and experience to improve their competitiveness on the basis of their use. the potential advantage, the tourism advantage of the destination, the diligence and creativity in labor and the initiative in applying the achievements of the fourth industrial revolution in the digital age.

It can be confirmed that the opportunities that APEC 2017 Vietnam bring to Vietnam tourism is very large. However, in order to make these opportunities a reality, contributing to creating new motives for Vietnam’s tourism development, successfully implementing strategic objectives for basic tourism to become a key economic sector. It is necessary to have the sensitivity to seize the opportunities, determination and initiative of the entire tourism sector, the effective support and cooperation of branches and localities under the direction of the Government.