Halong bay, Vietnam, natural wonders of the world. is an attractive destination for millions of visitors each year. However, it is located in the North of Vietnam, where there is a rich variety of weather in the year, so to really have a full trip, we need to understand the most appropriate time to visit Halong, Halong bay weather. 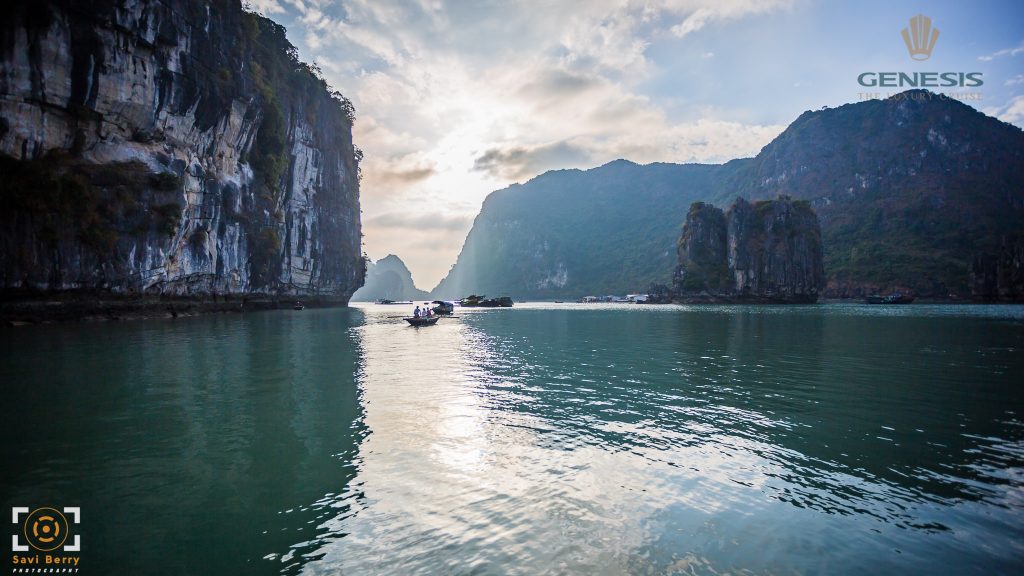 Halong Bay is in North Eastern Vietnam. The coast stretches a vast 120km from Yen Hung to Van Don. It has a tropical climate with two distinct seasons: a hot and humid summer and a cold and drier winter. Halong Bay’s average temperature is from 15°C- 25°C. Follow the link for a current weather forecast if planning a visit to Ha Long Bay, as the island experiences annual rainfall from between 2 meters and 2.2 meters, so choose the best time to go Halong bay.
The summer months in Halong bay (June to August), are generally much wetter, due to the tropical rainstorms. Average temperatures range between lows of 17°C to highs of 32°C. In general August is the hottest time of the year to visit, however also the wettest. Rainfall has been recorded at approximately 265 millimetres, with the average rain or drizzle falling on 14 days of the month. Sunshine throughout these months range between 8-9 hours per day. Night time temperatures rarely drop below 25°C, providing a very warm evening.

During the winter months (November-February), HaLong bay‘s climate tends to be a lot drier and cooler, making it the ‘low season’ to visit for domestic tourist but high season for Foreigner. Temperatures range from lows of 0°C to highs of 24°C. There is usually around 5 to 8 hours of sunshine per day, with November being the sunniest month. During these months the humidity is approximately 83% and the average rainfall is 23mm, with the wettest month being January. In general, these months usually present fog, and tend to have low visibility. (Halong bay weather ).

2. How Halong bay weather impacts to the cruise trip?

every years, in Vietnam, there are around 12 storms and thunder, almost happen from July to November. The storm and thunders will cause the cruise trip to be cancelled for safety of tourist.
Halong bay management will report the weather forecast by 7.00AM, 11.00AM, 3.00PM. For the morning of the Halong trip from Hanoi, the last news about weather would be announced by 11.00AM, that time, the tourist almost reach Halong bay. A lot of cases, the cruise trips were cancelled just before tourist arriving. So they just got the lunch then get back Hanoi, spend one day just to see Halong pier then get back Hanoi again, it is very bad luck.

Beside storm and thunder, the seasonal winds from the North down to the South also a reason cause the cruise trips to be cancelled. It is almost happened from middle of October to December when the weather change from autumm to winter in North of Vietnam. Some time, tourist go to Halong city at noon and see that, the weather is nice with light wind, blue sky, sunshine…but why the cruise also be cancelled, so angry, is’nt it? But tourist will do not know that, a seasonal wind is on the way coming to Tonkin gulf in the evening, it is very dangerous if all cruises sails out to stay in the bay at night. So please keep calm to listen the explaination from tour guide once the above case happen, it is very bad luck but also is a feature of Halong bay cruise trip, nobody want this happen.

For cancelled trips by weather, almost cruise companies will refund almost money to clients. They usually chage the lunch and a part of money amount if cruise could travel for a day tour then go back pier in afternoon and get back Hanoi. It is depend on policy of per company also. Please check it up before you join the trip.

HaLong Bay is a UNESCO World Heritage Site located in Quang Ninh province, Vietnam. The bay consists of a broad cluster of over 3,000 limestone monolithic islands, each topped with thick jungle vegetation. Some of the islands are hollow, with enormous caves. Ha Long Bay is an amazing seascape, sculpted by nature itself. Most of the islands are uninhabited, because of their rocky nature. Significant features of Ha Long Bay include the well developed limestone caves with pillars, notches and arches. In addition, there are many lakes within the limestone islands. Also, there are caves and grottos, filled with small waterfalls, stalactites and stalagmites. Visitors can rent a kayak or a junk boat to explore the different islands.

The bay maintains a high level of naturalness, despite its long history of human use. Many tourists visit HaLong bay each year, to feast their eyes on its’ amazing limestone islands, rock formations and caves. The islands and islets have odd shapes because rainwater has worked its way through the limestone. Every year, heavy tropical rains wash out limestone and carve out the odd shapes, creating caves and grottos. This phenomenon is called a tower karst. Therefore, it is recommended that you view our rain charts before planning your visit to Ha Long bay.
In contrast to the rest of the world, land formations in Halong Bay are standing in the water, and the ocean waves continue to carve the shoreline, deepening the caves and changing the face of the cliffs and grottos. (Halong bay weather). 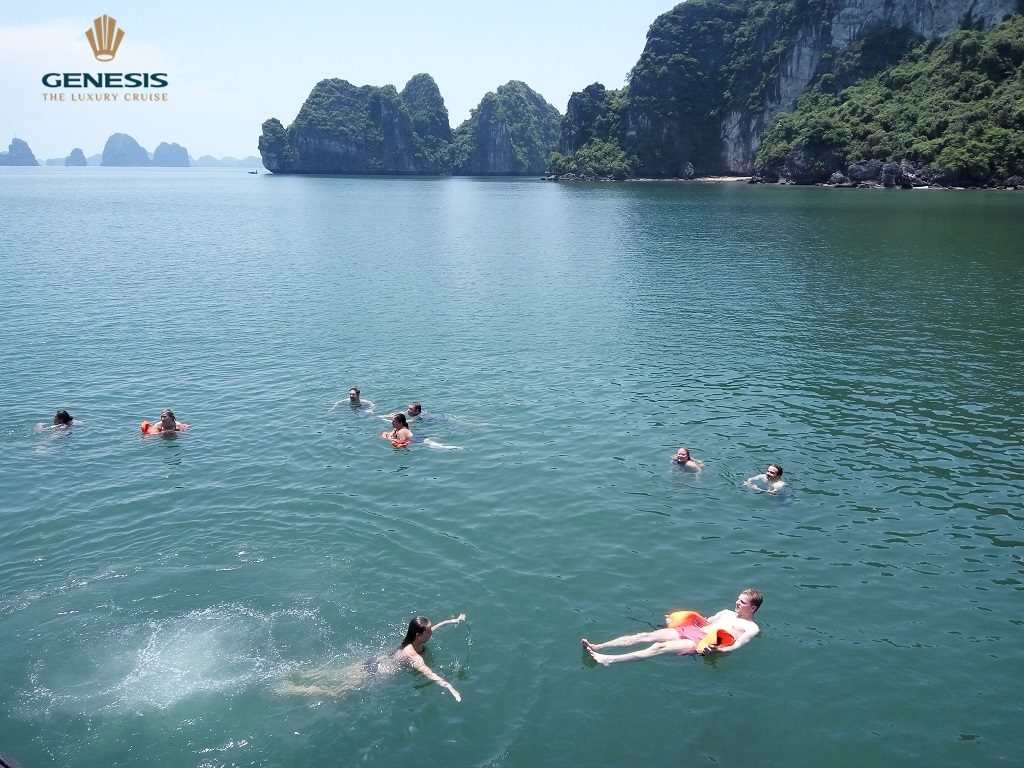 Dau go Cave Is one of the most famous caves in Halong bay. The cave’s name is derived from 13th century, when General Tran Hung Dao used the cave to hide his lethally sharpened wooden stakes. These weapons were used later to destroy enemy Mongol fleets.
Thien Cung Cave was discovered recently in the mid-1990s on Dau Go Island. The cave can be reached by a steep flight of steps. It is illuminated by floodlights in pink, green and blue that draw attention to the sparkling stalactites that hang from the high ceiling.

Sung Sot Cave
Hang Sung Sot (amazing cave) is located on Bo Hon Island, it is known as “The Cave of Awe” and it features three chambers. The first cavern features a large rock that is lit in pink. This rock is worshiped as a fertility symbol by the locals.
Dong Tam Cung is a large karst fissure; it consists of three chambers that are full of stalactites and stalagmites. All three grottoes are illuminated by strategically placed spotlights, which emphasize the variety of stalactites.

Trong Cave is southeast of Hang Bo Nau. It is known as the “Drum Cave” because it echoes faintly with a percussive sound when a swift wind blows past its stalactites and stalagmites.
Tuan Chau Island is a large island to the south of Bai Chay. It has been developed as a recreation complex. The island provides tourist entertainment in the form of whale, dolphin, and sea lion shows. Visitors can also relax on the sandy beach and enjoy local cuisine at a number of seafood restaurants there. Ha Long Bay Weather Climate.

Titop Island
Titop Island boasts an isolated beach that is great for swimming. You can hike to the top of the islet to see the breath-taking view of Halong Bay. Visitors can enjoy a number of water-sports facilities available at the small beach, including parasailing.

Dress code- Respect other cultures and abide local dress attire. Woman’s tops should cover their shoulders and both men and woman’s shorts should go to their knees, or longer. Shoes should be removed when entering temples, and other religious sites.
Greeting the locals- Instead of shaking hands, it is tradition in Vietnam to press your hands together in front of your chest and bow slightly. Halong bay Weather Climate.

Watch out for your chopsticks- In Asia, incense sticks are burned for the dead as a sign of respect. Therefore leaving chopsticks vertical, in this fashion, is a powerful symbol and unappreciated.
Remove those shoes- When entering someone’s home, it is tradition to remove your shoes. Vietnamese maintain clean floors, therefore it is deemed rude to keep shoes on. Also, never point the bottom of your feet towards other people or anything sacred such as a Buddha. Again this is seen as disrespectful and rude. Embrace the culture! Halong bay weather and climate.

Written by Sandie Chen
A Gener