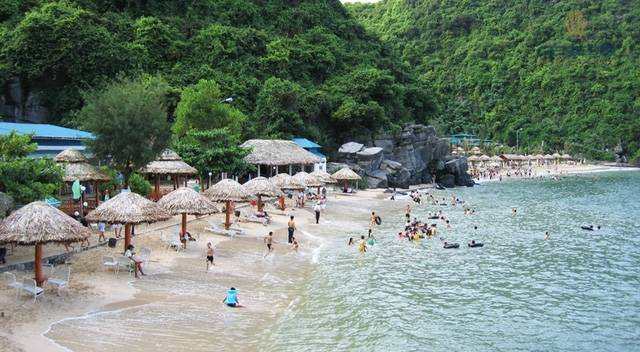 Talking to Quang Ninh, people think of Halong Bay right away with thousands of rocky islands splashing on the waves of sparkling water and the beautiful caves …However, beside Halong bay, Quang Ninh province still famous with destinations Halong city tour, as below:

Halong bay has an area of 1,553 km2 with 1969 islands, of which the UNESCO World Heritage Site covers an area of over 434 km2 with 788 islands, with special cultural, aesthetic, geological and biological value and economics. On the bay there are many islands, caves, beaches, beautiful scenery favorable for development of many points, many forms of tourist attractions. The most attractive cave system is Thien Cung, Dau Go cave, Sung Sot cave, Trinh Nu cave, Tam Cung cave …
Halong bay is a must-do destination for any tourists who come from around the World when they visit the North of Vietnam. (destinations Halong city tour).

A large and beautiful beach located close to the shores of Ha Long Bay, sandy beach 500m long, 100m wide. Every day in the early morning or evening, thousands of people come down here bathing, the beach becomes incredible bustle. It is also one of Fascinating destinations Quang Ninh Province.
The name Bai Chay has many different legends. According to legend, Bai Chay is the place where the troop of Nguyen Mong troop headed by Truong Van Ho to invade Vietnam was Tran Khanh Du and the Tran people burned and burned ashore. (Halong city tour).
As many of the enemy ships were on fire, the north-easterly wind blew fire on the west coast of Cua Luc and burned the forest. The forest was burned into Bai Chay today. 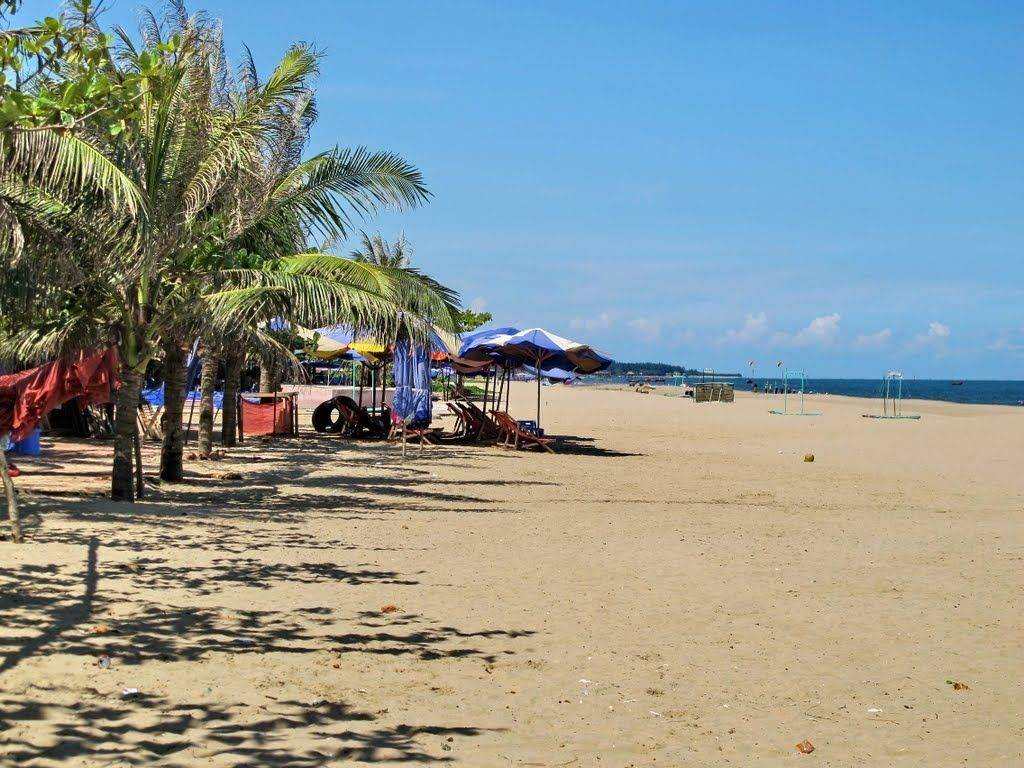 A folk legend says that ships often anchored on the west coast of Cua Luc. At the bottom and the side of the boat, there is usually a clawed dog that can eat a broken boat, so the fisherman must collect the leaves of casuarina burning around. From the side of Hon Gai and other places to look at it always see the fire burning so called Bai Bai Beach. (Halong city tour).

At the top of the mountain there is usually cloud cover so the day before is called Baiyun Mountain. Total length of road to the summit Yen Tu (Dong Pagoda) is about 6.000m with 6 hours continuous walk through thousands of stone steps, forest road … 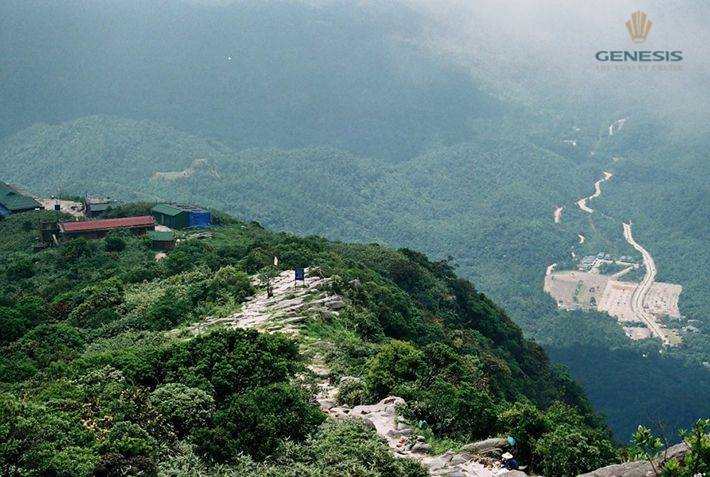 Journey to Yen Tu today will not be as hard as the old cable car system 1 near Hoa Yen was completed in 2002 and the cable car system 2 to the sky portal (Yen Tu area) was put into use. Used from the 2008 festive season. Yen Tu also is Fascinating destinations Quang Ninh Province.
Yen Tu became the center of Buddhism since King Tran Nhan Tong abandoned his throne in a monk’s robe and set up a unique Buddhist lineage in Vietnam, the Truc Lam Yen Tu. The first group with the name of Ngu Giac Hoang Tran Nhan Tong 1258-1308.
He has built hundreds of large and small projects on Yen Tu Mountain as a place for spiritual practice and propagation. After his death, his successor was French Loa Dong Kien Cuong (1284-1330), the second son of Truc Lam.
During 19 years of spiritual practice, he has written a series of books called Thạch loi ngu language and built 800 temples, am, small towers in the country with thousands of valuable statues, including famous pagodas such as Quynh Pagoda Lam, Ho Thien pagoda in Dong Trieu …

Tuan Chau Island is located in the southwest of Ha long City. This is the only land island in the 1,969 large islands in the connecting point of the World Natural Heritage Ha Long. The island has an area of about 400 hectares, which is endowed by nature with a beautiful natural condition.
With a smooth white sand mattress stretching 6km, the clear blue waters surround more than 200 hectares of green pine forest. The cool weather all year round to welcome the sea breeze blowing in, Tuan Chau island is worthy of a place to build luxury resort resort ideal.

In addition to the charms of natural beauty, Tuan Chau island is also an archaeological site of the Neolithic Ha Long culture with many stone tools found. Table grinders, stone axes, stripes, pottery …

Prior to 1997, Tuan Chau was a poor island commune with an area of 250 hectares belonging to Halong City, where people live mainly on fishing grounds with rudimentary fishing facilities. On the island there is no electricity, no water, no markets … 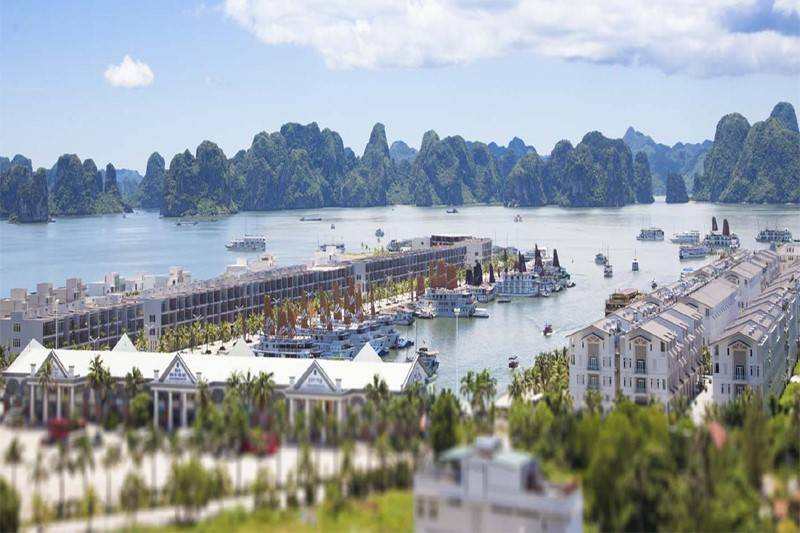 Particularly, the traffic is separated from the mainland, making the material and cultural life of the people who are already in difficulty more and more scarce.
Since 1998, the life of Tuan Chau people has started to improve as Au Lac company officially built a 2,145m long road, 15m wide connecting the island to Highway 18A, opening a tourist entertainment center. With many well-known works items.
Starting from here, the name of Tuan Chau island has been known at home and abroad, becoming the venue for important national and international events.
Guests can enjoy relaxing on the sandy beach with 4 km of famous Tra Co white sand. Beach and water games such as beach volleyball, soccer, surfing, parasailing, high speed water slides will bring you a healthy, fun and impressive vacation.

In particular, visitors also admire and enjoy the cuisine in Vietnam cuisine. This garden was built in a unique style, modeled the royal architecture of Vietnam in the 17th and 18th centuries.

Coto is an archipelago of Quang Ninh Province. The island is about 22km from the shore. Coming to Co To you will enjoy the beach stretches, with the smooth white sand, soft, watching the sunset on the sea is dying from Co Lighthouse. It is another fascinating destinations Quang Ninh Province 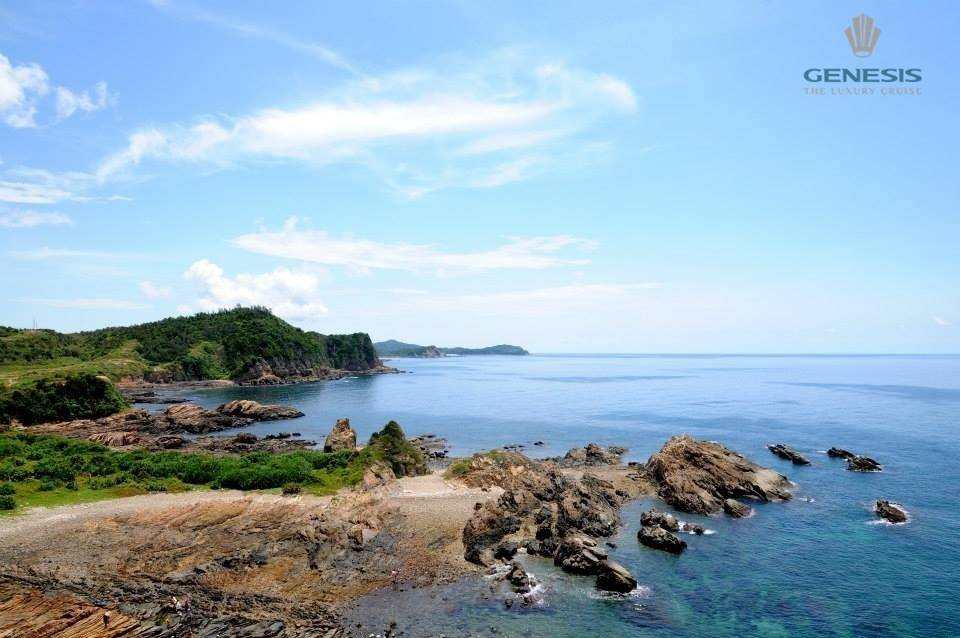 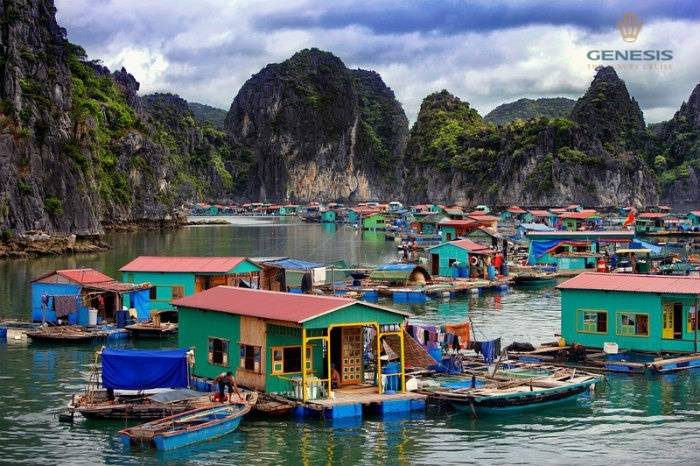 Coming to Cua Van fishing village, tourists are not only immersed in a peaceful, peaceful, charming and strange space, they have a chance to admire the scenery of nature and learn about the cultural life of fishermen. But also the village girls fishing village direct guide, guided rowing, spread net, drop fishing sentence shrimp …(Halong city tour).

Coming to Cua Van, visitors are easily attracted to the beauty of the boats, the bamboo bears parked in front of the house, the houses collapsed against storms, the fishermen simple but plain. With the hospitable, black skinned children, small figure with smile is very cheerful, innocent … Peaceful, gentle, filled with pristine features of a fishing village on the sea. (Halong city tour).

When the night falls, visitors will be rowing around the village, with fishermen pulling nets, ink fishing, the salt in each of the sea fishermen.

Follow the village fishing village, under the moonlight, visitors can enjoy the fun, thrilled watching the fun animated shape on the rocky mountains. The most interesting is when visitors themselves caught the fish, shrimp netted in the basket, take home processing by themselves, enjoy the seafood that they caught.

Night fishing village, or wedding, visitors also hear the fishermen singing, rowing (a form of chorus with many folk melodies endemic Halong bay). All make the attraction, unique to infinity.
Do not stop there, when coming to Cua Van, tourists will continue to enjoy more new forms of tourism, such as visiting Tien Ong, Ba Ham Lake, To fishing lagoon … with transport means of timber, wood … by the fishermen to transport.
After the sightseeing, visitors will be staying overnight at the fishermen’s families, enjoy the singing, love, sea …